What goes on behind the scenes when an international payment is made? We reveal all and demonstrate the various processing stages.

Better understanding results in fewer errors. Here you will find an animated film explaining the basics of international payments.

Remember to provide all the necessary information in the payment request. For transactions outside the SEPA zone, specific rules often apply. A few typical examples: 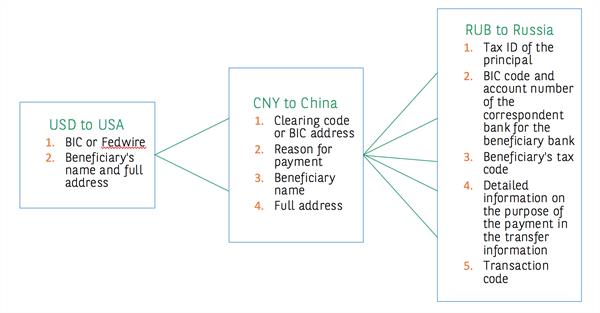 Not sure what you're doing? Check the Currency Guide here for information on all currencies.

2. The bank validates the input and sets the payment in motion
The bank performs the necessary compliance checks. The bank has an obligation to carry out a number of checks, for example in order to prevent payments being sent to countries under embargo or to people/entities subject to financial sanctions. The EU, the US, the UN and individual countries have such embargo lists.

3. The bank chooses the appropriate routing for executing the payment
For payments in EUR in the SEPA zone, agreed clearing systems are used. Elsewhere in the world, there is no system that is able to connect with any bank in any currency. That makes things complicated, as your banker must find correspondent bankers to ensure the money is received by the final beneficiary. Banks usually have one or several correspondents in each country for the currencies they allow payments in. Matching them with one another for every payment is no small feat. When that has been done, the money can subsequently pass through each of those banks. Your bank will determine the optimal routing on the basis of a number of criteria. These are the main ones:

The solution? A 'correspondent bank' that does have access to the local clearing system. Many banks have a worldwide network of such correspondent banks. They hold accounts with them (called 'nostro' accounts) via which they can route payments. The correspondent bankers then settle the amounts so that the beneficiary bank receives the money and can pay the final beneficiary.

4. The customer receives the details of the payment
The entire process concludes with reporting: the customer sees all credit and debit information on their bank statements.

Watch out for 'restricted' currencies

An example of a 'restricted' currency is the BRL, the Brazilian real. Banks have a workaround for this problem. They conclude an agreement with a correspondent who does have access to the currency. They send the equivalent value in EUR or USD, convert the amount into the local currency in the country (in this case BRL), and forward that amount to the beneficiary.

To ensure routing is successful, banks communicate with one another via the SWIFT network (Society for Worldwide Financial Communication). SWIFT is owned by financial organisations worldwide. There is a specific standard for each form of communication, for example MT 101, MT 202, etc. In the case of SWIFT, a specific address is also required: the BIC (Bank Identification Code).

Who pays what when you make an international payment? And when will the money be available in the beneficiary's account? The latter depends on the cut-off time.

The principal and the beneficiary decide between themselves how the costs of an international payment are to be divided. This can be done in three ways:

The principal pays all of the costs, including those charged by the correspondent bank and the beneficiary's bank.

The beneficiary pays all the costs, including the costs charged by the principal's bank.

Another tricky question is the duration: when will the money be available in the beneficiary's account? This depends on the cut-off time. This is the latest time at which your bank can guarantee that the funds will be credited to the correspondent banker of the beneficiary's bank on the agreed date. Remember: this does not necessarily mean that the beneficiary will receive the money on that payment date.

Everything you ever wanted to know about international payments

From Albania to Zambia: the BNP Paribas Currency Guide contains everything you ever wanted to know (and more) about international payments in 132 currencies.

At 420 pages long, it's quite a hefty tome to keep on your desk. Fortunately, the BNP Paribas Currency Guide is also available online. For the most recent version, click here. The guide is produced by the Cash Management Competence Center. As the head of Product Management Cash Management at BNP Paribas Fortis, Jo Germeys is very familiar with the concerns of Belgian entrepreneurs and organisations. Which is why they find this guide a useful tool.

'We try and keep our customers informed about changes in legislation or the banking world. However, companies often have so much to think about that the message doesn't always stick. This is usually not a major problem, but it does increase the risk of errors, delays and extra costs. That is why the Currency Guide is an excellent tool.'

In the past, an abridged version of this guide was available for the most common currencies, but the latest version is exhaustive, listing every currency and its associated regulations in alphabetical order. A two-page overview of each currency is provided. First of all, this overview contains clear currency guidelines. For example, that for payments in Canadian dollars you have to give not only an invoice number but also a clear description, in English, of the type of payment; for example, 'payment of travel expenses'. In addition to this standard information, the guide also explains that the IBAN format is not used in Canada. In this case, it is mandatory that you provide a full address and a nine-digit CC code. The first four digits represent the routing number, and the last five the transit number of the bank. Subsequently, there is also an explanation of how the payment must be formatted.

'Most businesses only work with a few currencies, so it's not too hard to read up on those currencies in detail and make the necessary adjustments. ERP packages are often set up in such a way that you enter the same details for all countries, and that doesn't always work.'

International payments have long been sailing in calm waters. However, a few waves are starting to appear on the horizon. You as a customer will most probably be able to ride those waves without a problem, thanks to a host of new possibilities.

Embedded FX? You don't even need to remember the name, because the system works automatically, without you even having to think about it. FX doesn't stand for Hollywood-style special effects, but for Foreign Exchange, sometimes referred to as Cross Currency. You are guaranteed to come across this at some point if you make international payments, since they are not always executed in the currency of the debit account (referred to as 'mono-currency payments'). Sometimes, the currencies of the accounts the payment is being debited from or credited to may not be the same. These are FX payments. During such payments, an exchange takes place: one currency is sold and another bought, without you having to lift a finger.

The volumes on the FX market might be greater than you'd think. To put it plainly: they are enormous. Every day, more than 5 trillion American dollars are traded. That is 5000 billion American dollars, more than the volume involved in global equities trading...in a single day. The FX market operates day and night, and only closes over the weekend from 10 pm on Friday until 10 pm on Sunday.

'On the FX market, banks essentially play the role of a wholesaler: they buy and sell currencies on the international market, and then sell them on to the customer with a mark-up. BNP Paribas is one of the biggest players, ranking among the global top ten. There is no official market rate in this over-the-counter market. Each bank determines the rate at which it wants to buy and sell currencies itself. Unofficial market rates can be found in publications from a number of public institutions (such as the European Central Bank) and private organisations (Reuters, Bloomberg etc.). These are based on the average rate offered by a number of major banks.'

The rate is always determined per currency pair, for example the euro versus the American dollar: EUR/USD = 1.1119. The most traded pair is EUR/USD, which represents 25% of daily trade. Second on the list is the pair American dollar/Japanese yen (USD/JPY) with 18%, with British pound/American dollar (GBP/USD) coming in third at 9%.

'As for the rate, banks offer a number of options. The rate can be a live market rate that is continuously being updated. The EUR/USD rate, for example, is adjusted more than 50 times per second. Another option is a daily rate. In this case, a rate is offered that will apply for a certain period.'

For many companies, all of this hassle with exchange rates is a real headache. Too complex, too expensive in terms of administrative costs and too many exchange rate risks. For those customers, banks have a solution: embedded FX.

'When you make a payment in a currency you do not hold an account in, the bank will immediately retrieve a good exchange rate from its colleagues in the dealing room of the Global Markets department. The rate is usually confirmed within one hour after the customer has sent the payment. Unless large amounts are being transferred, the entire process is automatic. The IT systems used are much more efficient than they were just a few years ago, meaning that the bank is less exposed to volatility and can offer its customers a competitive rate. Embedded FX is an efficient and simple alternative for anyone who doesn't want to hold accounts in different currencies and run the exchange rate risks that entails. For the customer, it no longer matters what currency they use: the process is exactly the same. What's more, it gives them peace of mind, because they know that they'll always get a great rate.'